SPEED CONTINUES ON PRELIMINARY NIGHT: MACEDO DRIVES THE WHEELS OFF THE MVT #41 AS HE SETS QUICK TIME AND CHARGES TO A NINTH PLACE FINISH AT KNOXVILLE RACEWAY TO LOCK INTO SATURDAY’S SHOW

KNOXVILLE, IOWA (August 9, 2018) – With close to 100 teams entered to compete in the prestigious 5-hour ENERGY 410 Knoxville Nationals at Knoxville Raceway, you need to be on your game every time you hit the track to score as many points as possible. It is not easy by no means, but when the Jason Johnson Racing (JJR) #41 team rolled the Mesilla Valley Transportation (MVT)/Tarlton and Son Inc./Meyers Constructors Inc. #41 for Carson Macedo into the pit area they were up for the challenge. There would be 51 cars go on this preliminary night with a common goal – score as many points as possible.

Earlier in the day, Carson took Jaxx to the window for the pill draw. The fun-loving son of the 2016 Knoxville Nationals champion, Jason Johnson, drew the 17 pill, which was a good one as it positioned him as the ninth car to go out for his all-important qualifying laps. The California hot shoe then climbed into his Fibreworks Composites seat and buckled his belts aboard the Durst/MPI/Ray Evernham Enterprises Maxim Racing machine. The push truck tapped on his rear nerf bar and he rolled out onto the famous half-mile oval and got his Kistler Engines/All Pro Aluminum Cylinder Heads/Engler Machine & Tool powerplant up to speed as he took the green flag. He was building speed and momentum and turn his first lap in at 15.734 seconds, which put him third on the speed charts. He stayed on the loud pedal the second time around and this lap was better at 15.520 seconds. That lap was special as it catapulted him into the top spot as the quick timer and the remaining 42 drivers failed to wrestle it away. Carson’s strong lap earned him quick time on the night.

With the track still fast and a little narrow he had his work cut out for him as they invert the fastest 8 starters in the 10-lap heat races and only take the top four to transfer them into the feature event. The Lemoore, California driver climbed into the cockpit of his Maxim Racing machine and rolled onto the track. Matt Covington and Sam Hafertepe, Jr. were in row one with Kraig Kinser, Mark Dobmeier, John Carney, Cale Thomas and Scott Bogucki started in the first seven spots with Thomas Kennedy and Lee Jacobs rounding out the field. The initial green saw Macedo drive around the top into the fifth running position before a yellow was displayed that reverted them back in a complete restart. On the next attempt, the field bunched up on the restart and Carson settled into the eighth spot in the running order. He was wheeling hard and had speed as he drove into the sixth spot at the finish, coming home behind Hafertepe, Dobmeier, Kinser, and Carney who earned the transfer positions out of the heat.

Relegated to the pole position to start the 12-lap B-Main, where the last for A-Main spots were up for grabs, Carson shared the front row with another young and talented driver, Parker Price-Miller who was driving the Indy Racing Parts #71P. When the green flag waved, Carson got up on the wheel and drove into the lead. He led the first six laps in the Jonestown KOA/WELD Racing Wheels #41 when a caution for Joey Saldana was displayed as he slowed coming out of turn four. They got up to speed with Macedo in the lead and Price-Miller close behind. Macedo would drive off turn four and take the win over Price-Miller and Shane Stewart with Jamie Veal securing the final transfer position.

Macedo and the JJR #41 team would have some work to do in the 25-lap feature as they were starting from the inside of row eleven in the preliminary feature with their MVT/Waco Metal #41 Maxim. Not deterred they rolled out onto the track with Macedo ready to unleash his talents and skills. When the green flag waved, Macedo wasted no time standing on the gas as he picked up five positions on the initial lap before a caution flag was thrown for a slowing Josh Schneiderman. Simultaneously, Jamie Veal ducked into the pit area and rejoined the field. On the restart, with Brad Sweet leading, Macedo went back to work before another yellow was shown, this time for Sammy Swindell. With two laps in the books, he was running in the 15th position. Then the green flag was waving again and Macedo and Shane Stewart were embroiled in a tight battle for position. The two talented speed chauffeurs were a show within a show as they were racing wheel-to-wheel, lap after lap before Stewart pull ahead. Macedo was not deterred and showed off his own determination as he drove right behind as they were picking up position. Sweet took the win over Rico Abreu, David Gravel and Tim Kaeding as Terry McCarl rounding out the top five. Carson Macedo came home ninth, but more importantly locked into the 58th Annual Knoxville Nationals on Saturday night where he will start eighth on the starting grid. A great run for Macedo and the forty-one team! 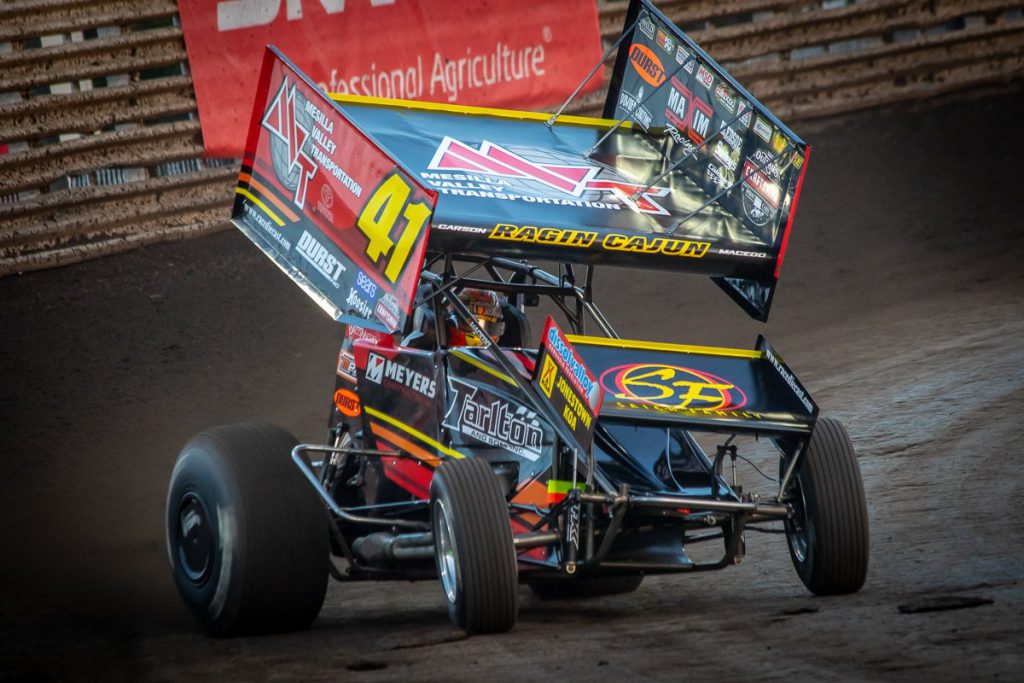 Carson and the JJR #41 team will be back in action on Friday night in the Speed Sport World Challenge where they will start from the 13th position.

Macedo Shows Determination and Speed in Preliminary Action at the 410 Knoxville Nationals and It Pays Off!