RUNNER-UP TO SCHATZ IN CHAMPIONSHIP FINALE: THE RAGIN’ CAJUN KEEPS TRUCKING IN THE 40TH ANNUAL AGCO JACKSON NATIONALS AS HE DRIVES HIS MESILLA VALLEY TRANSPORTATION (MVT) #41 TO A PODIUM FINISH

JACKSON, MINNESOTA (June 9, 2018) – Collecting more confetti after picking up his second victory in a row to sweep both of the 40th Annual AGCO Jackson Nationals preliminary features, Jason and the JJR #41 Mesilla Valley Transportation (MVT)/Maxim Racing machine were at the top of the standings with 697 points. That point total locked Jason and the JJR team into the $40,000-to-win finale, as they would start on the pole in the Sears Craftsman Dash. They focused on the goal that their car would be covered with confetti again at the end of the night. It would not be an easy task, but these MVT guys did a tremendous job on this JJR #41 all weekend here at the Jackson Nationals

Track officials meticulously reworked the racing surface after the day race and victory lane interviews were completed. The daylight started giving way to nighttime as the four heat races were run for the remaining competitors looking to earn their way into the show. The heat race winners were Tim Kaeding, David Gravel, Donny Schatz and Jason Sides. They would join the Ragin’ Cajun and the three other drivers locked in on points – Brad Sweet (678 points); Daryn Pittman (677 points); and, Brian Brown (633 points) in the Sears Craftsman Dash with the finish to set the starting lineup for the 40-lap Jackson Nationals championship feature.

Starting from the pole with Brad Sweet’s NAPA Auto Parts #49 to his outside, Jason rolled around in his Mesilla Valley Transportation (MVT)/K&N Filters #41 Maxim awaiting the start. Daryn Pittman and Brian Brown would comprise row two with Kaeding, Gravel, Schatz and Sides filling out the remainder of the starting lineup in rows three and four. When the caution lights went out and the green lights were illuminated, Jason used his Max Papis Innovations (MPI) steering wheel to maneuver into the lead with Sweet, Pittman and Brown in hot pursuit. Brown powered into the runner-up position from his fourth starting position as Sweet fell back to fourth but quickly recovered to race back to third. Meanwhile, Jason was building on his lead hitting his marks and cruising through the turns leaning on the cushion. Jason would go on to win the Sears Craftsman Dash over Brown, Sweet, Gravel and Pittman with Kaeding, Schatz and Sides completing the finishing order.

Earning the right to start from the pole for the 40-lap 40th Annual AGCO Jackson Nationals, Jason and Philip discussed race setup and strategy for their MVT Maxim Racing rocket. The 8-minute horn sounded as the teams wrapped up their final preparations and topped off the fuel. Jason climbed into his Fibreworks Composites custom fitted seat and buckled into his Crow Enterprizes safety belts. He pulled on his Bell Racing USA helmet emblazoned with the MVT logo on the side. It was time to get back to business in Minnesota for the Ragin’ Cajun. With an impressive fireworks display over turn three as they presented themselves in their four-wide salute to the fans, the stars of sprint car racing paid tribute to the great fans the packed the Jackson Motorplex. Now it was time to get down to business for 40 laps around the Jackson Motorplex racing surface. On the initial start, Jason drove off the bottom and dove low entering turn one as he drifted up across the track to the apex with Brian Brown right on the tail tank of his Dissolvalloy Downhole Revolution/Fischer Body Shop #41 Maxim. However, the action slowed when Ian Madsen made contact with the outside wall in turn one bringing out the caution. A complete restart, Jason again vaulted into the lead over Brown as he led the field in clean air. The track was fast and racy and the competition fierce. On lap 2, Daryn Pittman spun and flipped over after contact with Cory Eliason while running in the top five bringing out the red flag. During open red flag conditions, Philip and the JJR crew topped off the fuel and made some minor adjustments for their driver. When racing resumed, the Ragin’ Cajun again took command at the front of the pack and was racing ahead of Brown and Schatz. Another yellow, this time for Brad Sweet who was making noise in the top five as he suffered front end damage. The #49 crew made the necessary changes to fix their entry and he would rejoin the field. When they got back up to speed it was the forty-one at the front of the field, but Schatz now made the pass to get by Brown. He set his sights on catching the Ragin’ Cajun. Jason would keep his Hoosier Racing Tires rolling to lead the first 17 laps of the Jackson Nationals before Schatz used the low line to make the pass for the lead on lap 18. He would build a sizable lead, but the driver of the Mesilla Valley Transportation #41 was tenacious and fought his way back as the track started to take on rubber and the leader caught up to the slower traffic. With five laps to go, Jason closed in on Schatz shrinking the gap quite a bit. Unfortunately, he could not catch him as the laps ran out as he crossed under the waving checkered flags with a solid second place finish behind Schatz. Brian Brown would come home third with David Gravel in fourth and Logan Schuchart rounding out the top five. After the race, Jason was pleased with their weekend highlighting, “The MVT guys gave me a great car all weekend.” He continued, “The track started to take on rubber there and Donny got by me. He is not going to make a mistake in these big races.” He concluded by saying, “We will keep digging and keep trying.” The right attitude as they head down the road of continued success during the 2018 World of Outlaws Craftsman Sprint Car Series season. 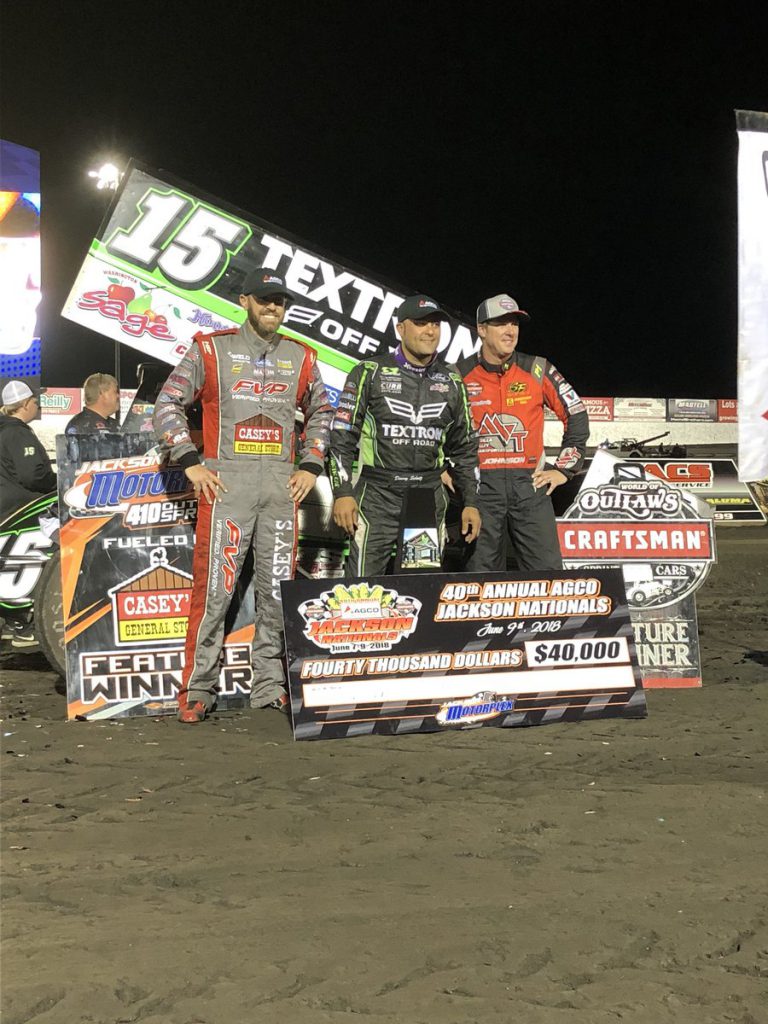 An Amazing Weekend at 40th Annual AGCO Jackson Nationals Ends with a Solid Runner-Up Finish for Jason and the JJR #41 Team!