MECHANICSBURG, PENNSYLVANIA (September 29, 2018) – Sprint car fans and teams rolled into Central Pennsylvania with heavy hearts as they mourned the loss of one of the sport’s greatest ambassadors – Greg Hodnett – who lost his life in a racing accident at BAPS Motor Speedway the week before while running in the top five. The Jason Johnson Racing (JJR) team and family are all too familiar with loss, but wanted to come into honor Hodnett. With two competitive nights of action starting on Friday night, Carson Macedo was back in the cockpit of the Jonestown KOA #41 Maxim for one of the sports premier event. 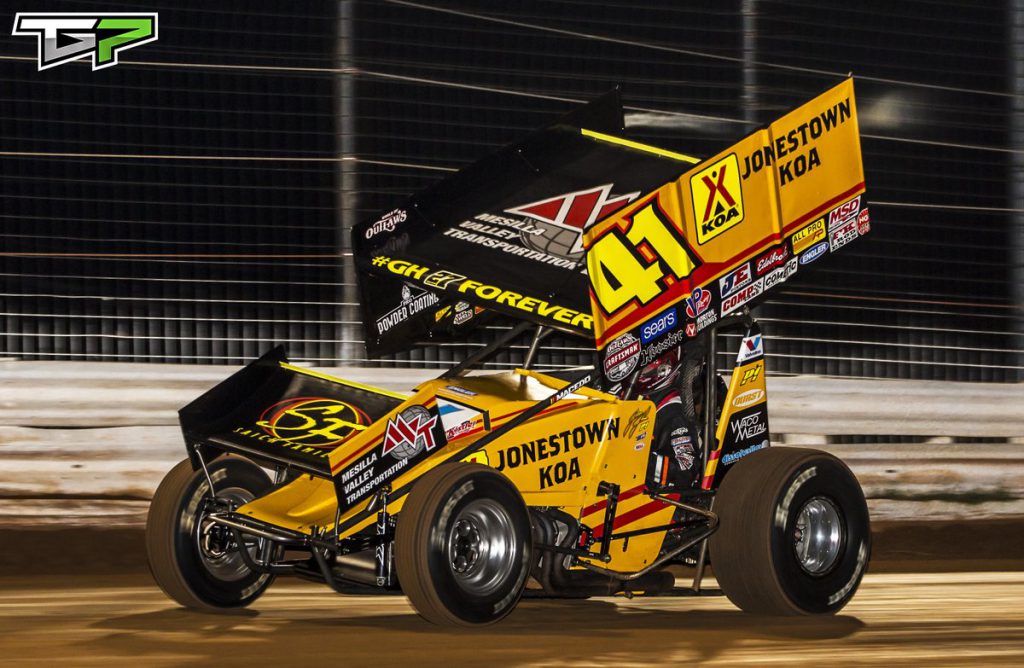 FRIDAY NIGHT AT THE GROVE

With 50 competitive teams in the pit area, making the show is alone an accomplishment. The field of competitors split into two groups for time trial qualifying. Carson would climb into the Jonestown KOA/DURST #41 and push off seventeenth in Flight A for his two laps around the famous oval. When he mashed the gas pedal, his Kistler Engines power came to life and he stopped the clock at 16.675 seconds. He stayed on the loud pedal and the next time around improved his time at 16.501 seconds, which ended up 11th quick overall in Flight A.

When the heat race lineups were set, he would start from the outside of row two with Brian Brown to his inside. The two speed chauffeurs lined up behind the front row starts, Tim Shaffer and Robbie Kendall, for the eight laps of racing. When the green flag waved, the field’s engines came to life as Shaffer led after lap one. He would show the way and take the win over Brian Brown as Carson Macedo trucked to a third place finish in the Mesilla Valley Transportation #41.

Locking himself into the 25-lap feature event, Philip and the JJR crew went to work to try to continue to make improvements on their entry. The 8-minute horn sounded and the crew made their final adjustments as Macedo buckled the chinstrap on his BELL Racing helmet. He would start from the inside of row eight with fellow All Star Circuit of Champions competitor, Ryan Smith, to his outside. David Gravel would charge into the lead and show the way for the first 15 laps. Macedo was cooking in the Jonestown KOA #41 Maxim as he was making progress before bringing out the yellow flag when his front wing fell. He went pit side, but was unable to make the necessary changes in time in order to get back out and recorded a 25th place finish. Giovanni (Gio) Scelzi took the lead from Gravel and crossed under the checkers to become the youngest driver ever to win at Williams Grove. 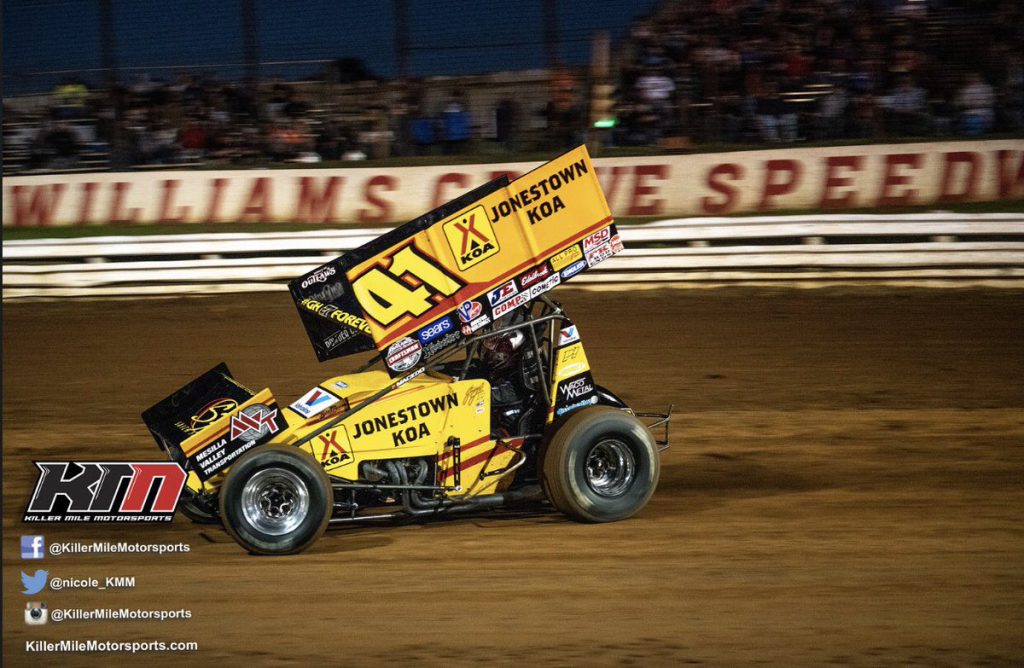 SATRUDAY NIGHT AT THE GROVE

The pit area was again brimming with 49 sprint car teams for the 56th Annual Champion Racing Oil Williams Grove National Open. It was a crisp fall evening in Central Pennsylvania, but things were about to heat up as there was a $56,000 check on the line for the winner at the end of the evening.

With a loaded field, time trials again separated into two flights, with Carson Macedo pulling out eighth in Flight B in the popular yellow Jonestown KOA/Mesilla Valley Transportation (MVT) #41 Maxim. The track had lost some speed but when Macedo dropped his right foot he zoomed around the half-mile oval, he recorded his first lap at 16.706 seconds. He stayed on the hammer, but his second lap was slightly slower at 16.824 seconds. The faster of his two laps was ninth quick overall in Flight B.

For the 8-lap heat race, where only the top three transfer to the feature, Macedo would start third aboard the Dissolvalloy Downhole Revolution/WELD Racing #41 with Pennsylvania regular Chad Trout to his outside. Lance Dewease and Ryan Smith brought the field to the green flag, with Dewease leading Smith and Macedo into turn one. The front three would stay that way for the entire distance as they secured the transfer positions to the prestigious $56,000-to-win 56th Annual Champion Racing Oil Williams Grove National Open.

You talk to any driver or crew chief and they will tell you this historic paper clipped shaped, half-mile oval is tricky to not only drive but also set up for success. Carson and Philip had some discussions and hoped their decisions paid dividends after 40 laps of racing at Williams Grove Speedway. Sean Michael paced the field in the Heffner Racing #27 that was formerly driven by the late Greg Hodnett. The fans in the stands showed their appreciation as they lite up their flashlights on their cellphones in an emotional tribute to a racing hero. When the initial green flag flew over the field, Brock Zearfoss jumped into the top spot and would led the first 23 laps as he raced wheel-to-wheel with another racing hero Lance Dewease in the Don Kreitz, Jr. #69k. Meanwhile, Macedo was wheelin’ the Jonestown KOA #41 Maxim and looking to take advantage of every opportunity racing in the middle of the pack. He showed speed in the first half of the race, but when Dewease took over the lead Macedo was struggling to hold his positions with each passing lap. Dewease would go on to collect the emotional, but rich, $56,000 victory as he beat Daryn Pittman, Brian Montieth, Tim Shaffer and Ryan Smith to the finish line. Carson brought the JJR entry home with a 20th place finish to cap off the weekend.