KICKING OFF MEMORIAL DAY WEEKEND IN CHARLOTTE: THE JONESTOWN KOA #41 CAR IS FINALLY UNVEILED UNDER THE SOUTHERN LIGHTS AND SPARKLES WITH A SOLID EIGHTH PLACE RUN AT THE DIRT TRACK AT CHARLOTTE

CONCORD, NORTH CAROLINA (May 25, 2018) – After rain washed out the front end of the spring swing on the East Coast, Jason and the JJR #41 team proudly unveiled their Jonestown KOA #41 Maxim as they unloaded for the Outlaw Showdown at The Dirt Track at Charlotte. With the NASCAR stars across the street for the a Memorial Day weekend tradition, the Coca Cola 600, Jason and the World of Outlaws Craftsman Sprint Car Series stars filled the pit area at the beautiful half-mile oval. There were 26 drivers and teams signed in for action and the grounds were dry, which was a welcomed condition after seeing a lot of rain recently.

Jason would be one of the later cars to push off for two solo laps in front of the fans who came to enjoy the show. He pedaled down and took the green flag aboard the Jonestown KOA/BMRS #41. These professionals make it look easy running these rockets at speed as the Louisiana-born native stopped the clock at 13.667 seconds the first time around. He was hammer down and improved the second lap with a time of 13.608 seconds, which ended up 10th quick overall for the night.

Slated to start fourth in the first and fastest heat race that was loaded with many talented sprint car drivers – Logan Schuchart, Gerard McIntyre, Jacob Allen, Ricky Stenhouse, Jr., Daryn Pittman, Brent Marks, Kasey Kahne and Justin Barger – with the top six transferring to the feature event. When the yellow lights around the speedway turned green, the field got up to speed. Jason drove hard on the top side from the outside of row two and was trucking in the Mesilla Valley Transportation (MVT) #41 Maxim. Making his way to the bottom, he closed in and moved into the show position with sixth starting Daryn Pittman stalking him just off his tail tank. Pittman would follow the Ragin’ Cajun for a few laps before finding a hole to squeeze through coming off turn four with a few laps to go. Schuchart would take the heat race victory over McIntyre with Pittman coming home third and Jason securing the fourth finishing position. Kasey Kahne and Jacob Allen secured the final two transfer positions in the high-speed shootout.

Before the Schoenfeld Headers even cooled, Philip Dietz, Tyler Elliott and Patrick Dudzinski went to work to get the Jonestown KOA/MVT #41 ready for the 30-lap feature finale. After final track preparation was completed, the 8-minute horn sounded. Jason pulled the zipper up on his P1 Performance Racewear and climbed into his office for the evening of speed safely secured in his Fibreworks Composites fitted seat. He buckled the helmet strap on his Shell Shock custom painted Bell Racing Helmet and rolled into the staging area. It was go time for the World of Outlaw stars. Donny Schatz and Shane Stewart were leading the field from the front row as Jason shared row five with David Gravel. After the four-wide salute to the fans and the impressive fireworks and pyrotechnic display, it was time for The Greatest Show on Dirt to give the fans their monies worth. Stewart would jump into the top spot on lap one as Jason moved at speed from the ninth position. Stewart would lead the first 23 laps in the ENEOS #2 with Jason picking up one spot at a time as he moved up to seventh in the running order. Schatz would battle by Stewart for the top spot and take the win over Stewart, Logan Schuchart, and Brad Sweet with Sheldon Haudenschild rounding out the top five. Jason came home with a solid eighth place finish in the Outlaw Showdown at The Dirt Track at Charlotte.

Jason and the team will now head for Lawrenceburg Speedway, in Lawrenceburg, Indiana, for the Memorial Day Spectacular on Monday. Come out and catch up with the forty-one team. 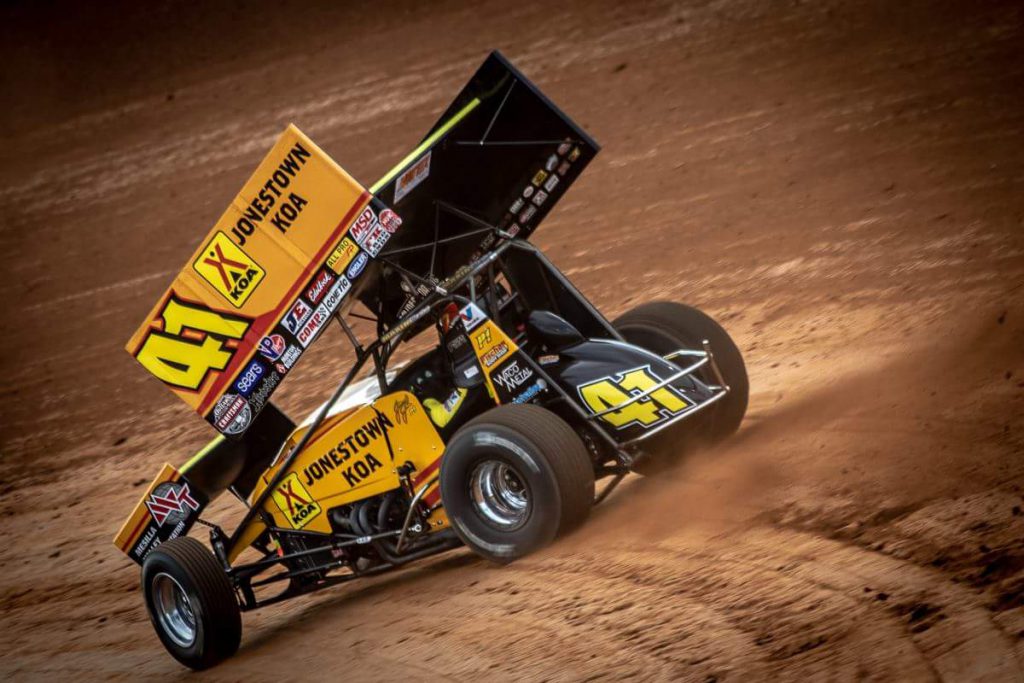 A Solid Run for the Ragin’ Cajun and JJR #41 Team in Charlotte, North Carolina to Kick Off Memorial Day Weekend to Honor Our Heroes!