FORTY-ONE FAST IN FLORIDA: JOHNSON’S VALIANT EFFORT AT THE FRONT OF THE FIELD FALLS JUST SHORT OF THE WIN AS THE MVT #41 COMES HOME WITH A RUNNER-UP FINISH AT THE 47TH ANNUAL DIRTCAR NATIONALS

BARBERVILLE, FLORIDA (February 10, 2018) – The action kept rolling at Volusia Speedway Park in the 47th Annual DIRTcar Nationals as the World of Outlaws Craftsman Sprint Car Series was back at the fast half-mile for the second night of WoO racing. Jason and the JJR #41 crew were looking to continue their momentum from the previous night as they drove forward 11 spots to register a 7th place finish to open the WoO season ON Friday night. The fans again came out in masses as it was a packed house to see the best in the business show off their skills under their wings in the Sunshine State.

With 33 cars registered on Saturday night it was ‘go time’ at Volusia Speedway Park. Jason was the seventh car out for his two individual laps in the Mesilla Valley Transportation (MVT)/Pro Powder Coating (PPC) #41 Maxim. The Louisiana-born racer was hauling as he took the green and stop the timer at 13.133 seconds the first time around. His second lap was slightly slower at 13.134 seconds, but the quicker of his two laps was seventh quick overall on the night.

Starting on the outside of the front row beside Brian Brown in the third 8-lap heat race, Jason was pumped and ready to get rolling as the two Missouri-based speedsters led the field to the green flag from the front of the field. This place is very fast and these professional drivers show their skills at speed as they compete for one of the 5 qualifying spots up for grabs to earn a spot in the A-Main feature finale. Brown took the lead early with a slight advantage over Johnson. The two talented drivers put on a show worth the price of admission for the fans as Brown eventually took the win by 0.192 seconds over Johnson with Parker Price-Miller, Daryn Pittman and Kraig Kinser locking in the final transfer positions.

Earning his first opportunity to compete in the Sears Craftsman Dash, Jason and the JJR #41 team were looking forward to earning the best starting position for the 30-lap feature event. They rolled around two-by-two and when the flagman unfurled the green flag, Jason got his Hoosier Racing Tires and Weld Racing wheel turning as he drove into the lead over Shaffer. With each passing lap he hits his marks and extended his lead slightly. When the checkered flag flew over the field, Jason collected his first Sears Craftsman Dash victory of the season over Shaffer by 1.820 second with Paul McMahan coming home third with Kerry Madsen and Logan Schuchart rounding out the top five. Donny Schatz came home sixth as Brian Brown, Shane Stewart, Rico Abreu and Jacob Allen completed the top ten.

Perched on the pole for the feature event, Philip, Tyler and Patrick made all of their last minute adjustments to Jason’s All Pro Aluminum Cylinder Heads/AutoMeter #41 entry. It was time to go racing at Volusia Speedway Park on the second night of WoO action as part of the 47th Annual DIRTcar Nationals festivities. The fuel was topped off in the Fuel Safe Systems bladder as he climbed into his office in his P1 Performance Racewear racing suit. After the four-wide salute to the great sprint car fans in the stands, the green flag waved and Jason drove off the bottom and into the lead. Tim Shaffer wasn’t letting him run away from the field as the two battled for the top spot. An early caution for a spinning Parker Price-Miller brought the field back together, but when the racing resumed Jason again seized the lead and started to build on it with each passing lap. The red paint Fischer Body Shop put on the Mesilla Valley Transportation (MVT) #41 glistened under the lights when a late race caution regrouped the field with 3 laps to go. Jason would lead lap 27, but Donny Schatz was right there knocking on the door as the leaders entered lapped traffic. With two laps to go, Schatz drove into the lead off turn four, but Jason drove into one high and cut the corner and dove low off turn two to retake the lead. Schatz stole it back when Jason got slowed slightly on the high side entering turn three and Schatz went on to collect his 250th career WoO win as Jason came home with a runner-up finish with Tim Shaffer completing the top three. On the front stretch, Jason was in good spirits as he explained, “I hesitated too long in traffic and Donny never hesitates. He is one of the toughest in the business.” He continued by praising his JJR crew stating, “The JJR guys worked hard and gave me a fast race car. I appreciate all their hard work to get the Mesilla Valley Transportation (MVT) car trucking.” 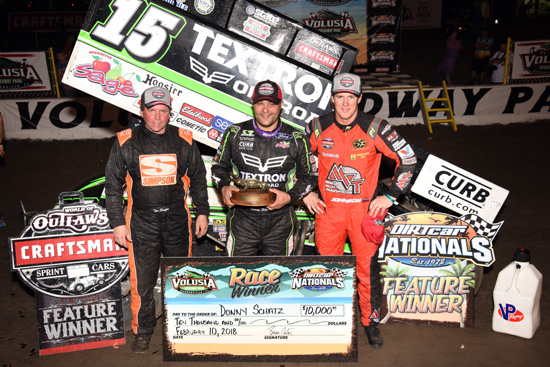 A Great Run for the Forty-One with a Runner-Up Finish at Volusia Speedway Park!