DRESSED UP IN THEIR FAVORITE BLUE: DISSOLVALLOY PAINT SCHEME UNVEILED AS CAJUN AND WOO STARS INVADE RIVER CITIES SPEEDWAY TO TAKE ON THE NORTH DAKOTA BULLRING WITH A 22ND PLACE FINISH

GRAND FORKS, NORTH DAKOTA (June 15, 2018) – Jason and the JJR team headed north to Grand Forks, North Dakota, to kick off the First Leg of the Gerdau Recycling Northern Tour on Friday night at River Cities Speedway located at the Grand Forks Fairgrounds. The folks at River Cities are proud of their track and proclaim it as “The World Famous Legendary Bullring and #1 Raciest 410 Sprint Car Track.” Every time Jason and his fellow World of Outlaws Craftsman Sprint Car Series competitors come to town, track officials and SLS Promotions give them a great track to race on so they can put on an incredible show for the fans who pack the house. On Friday evening, there were 35 competitive race teams ready to entertain as they lined up in the pit area at River Cities Speedway. Jason and the JJR crew were excited to roll out and show off their blue Dissolvalloy Downhole Revolution #41 Maxim for the first time this season. 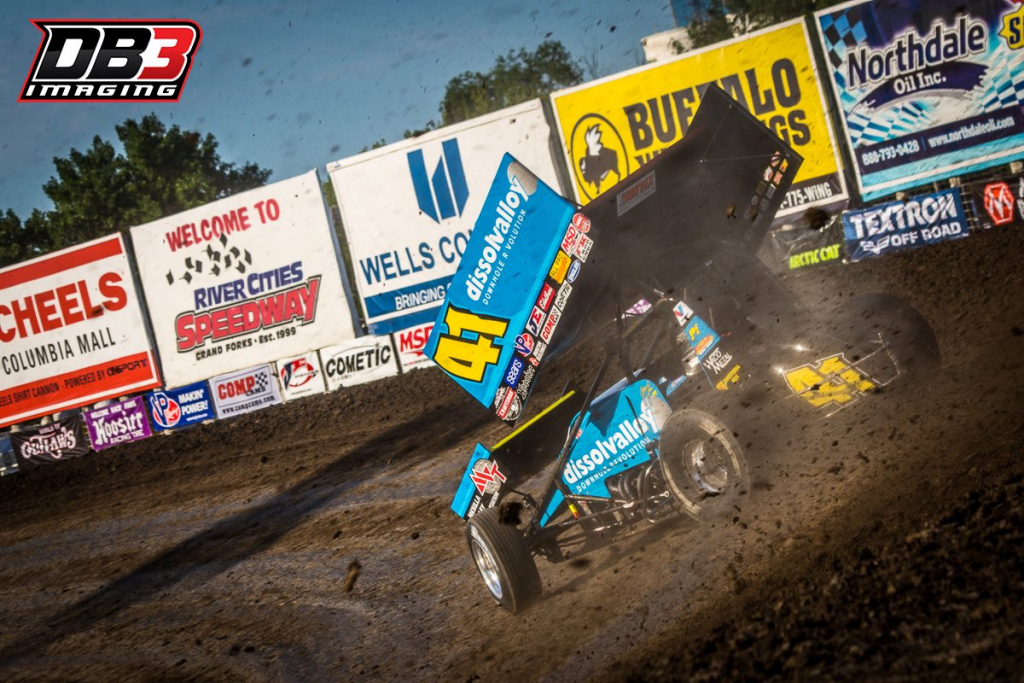 Jason would be the 34th driver out for his time trial laps aboard the Dissolvalloy/Valvoline/ChalkStix Torsion Bars #41 Maxim Racing machine. He would get rolling around the 3/10-mile clay oval and complete his first lap in 10.799 seconds. Trying hard to keep his speed and momentum moving in the right direction, he used his Kistler Engines horsepower to make his way around the top side of the speedway and raced his way under the waving checkered flags with a second lap time of 10.834 seconds. The faster of his two laps was 19th quick overall on the night.

There were four heat races slated for the night for the stout field of competitors. World of Outlaw officials pulled together the starting lineups and posted them for the teams. The Dissolvalloy Downhole Revolution/K&N Filters #41, with the Ragin’ Cajun behind the wheel, would start 5th on the grid of the third heat race. There is no easy out for any of the competitors when the best in the business are in town. Every position in the field counts and every talented drivers wants one of the top five qualifying spots that transfer to the feature event. Fellow P1 Performance Racewear (#p1posse) driver, Kerry Madsen, led the field to the green flag for the first of ten laps. He would command the top spot as Jason was in a spirited battle with Shane Stewart for the fourth position. Madsen would go on to take the win over Californian Cory Eliason, and Stewart with Jason rolling his WELD Racing wheels across the finish line in fourth as Hunter Schuerenberg secured the final transfer spot.

As the dusk skies darkened by the minute, it was time for the 40-lap feature event at River Cities Speedway. Jason would roll his Dissolvalloy Downhole Revolution #41 Maxim out under the lights and the Dissolvalloy blue shown distinctively. He would start from the 15th position beside another Madsen and #p1posse member, Ian Madsen in his #18, from row eight. When the green flag waved, Kerry Madsen drove the Muddy #2 into the lead over hometown favorite Donny Schatz. He would lead the field early, but it was the Ragin’ Cajun moving through the field as when the first caution flag waved. Even though he knocked the nose wing back on the opening lap in the tight racing action into turn one, he had speed and had motored his way all the way into the top ten on the leader board. The determined Louisianan was not done though. When the field got back up to speed he powered his way up to the sixth spot with five laps in the books. Madsen would relinquish the lead to Schatz, as Jason made it up as far as fifth position in his surge forward. With eight laps to go, and Schatz in the lead, Jason was running sixth when he spun off the turn four embankment bringing out the caution and negating his strong run forward. He rejoined the field at the back of the pack and was racing forward again when his front wing dropped, which caused him to spin again and bringing the JJR #41 team’s night to an early end and a 22nd place finish. Schatz went on to collect the win over Brad Sweet, Kerry Madsen and Shane Stewart with Daryn Pittman rounding out the top five. Not the debut they were looking forward, but they displayed their speed in their Dissolvalloy #41. They will get back at it on Sunday night in North Dakota at Nodak Speedway in Minot.

Quick Run Forward Filled with Excitement and Speed Ends in the Roughrider State with a 22nd Place Finish After Troubles!