CALIFORNIAN MACEDO STANDS ON THE KNOXVILLE PODIUM: A STRONG RUN FOR THE FORTY-ONE AS MACEDO DRIVES HARD TO THE LEAD BEFORE FINISHING IN THE RUNNER-UP SPOT IN THE 360 NATIONALS CHAMPIONSHIP FINALE

KNOXVILLE, IOWA (August 4, 2018) – After winning Friday night’s preliminary feature event, Carson Macedo and the JJR #41 team had their Dissolvalloy/Durst/Million Heir Cosmetics #41 Maxim Racing entry locked into the championship finale. They were set to start from the inside of row four from the seventh starting position in the 25-lap championship of the 28th Annual 360 Knoxville Nationals presented by Great Southern Bank.

Before the evening of racing got started, the team was recognized as they won the Jetco Inc. Best Appearing Car for their sweet blue Dissolvalloy Downhole Revolution #41 Maxim. Philip Deitz and the crew accepted the award and recognized Sean Cain at Blackbeard for the design, LogoDaddy Graphics for bringing the design to life with their vinyl graphics, and Fischer Body Shop for the paint work.

The best in the business made of the 24-car championship race. Joey Saldana and Gio Scelzi were at the front of the pack as they paced the field followed by Terry McCarl, Brian Brown, Greg Hodnett and Tim Keading. Carson shared row four with Thursday night’s preliminary winner Thomas Kennedy. Before the feature got started, the blue Dissolvalloy Downhole Revolution #41 paced the field to honor Jason Johnson. When they reset into their two-by-two starting order it was time to go racing at Knoxville Raceway! Joey Saldana jumped into the early lead with McCarl on the prowl. Carson moved into the sixth position and was making tracks and not looking back. Saldana would lead the first four circuits before McCarl made the pass for the lead following a restart when Brooke Tatnell made contact with Jamie Ball sending Ball flipping hard into the turn two wall. When the field restarted, McCarl drove to the front of the pack and would show the way up over the next 12 laps. Macedo was coming quick aboard the Mesilla Valley Transportation (MVT)/Jonestown KOA/Waco Metal #41 methodically making passes for position from the cockpit of his Maxim Racing chassis. When he moved into the second spot, he set his sights on the leader and started to track him down. Carson took the top spot in the forty-one on lap 17 and was setting a good pace as McCarl and Brown fought for position. During that battle for the runner-up position, McCarl found the rubber on the bottom and with that stuck and converted it to speed. Enough speed to track down Macedo to retake the lead on lap 23 to win his fifth career 360 Knoxville Nationals. Macedo brought the Dissolvalloy/Million Heir Cosmetics #41 Maxim home with a well-deserved runner-up finish as Brian Brown rounded out the podium. After the race, Carson explained, “My racecar was really fast.” He continued, “I had a blast driving this car this weekend. I can’t say enough about this whole family and this whole team.” Moreover, the team is having fun, which has always been a hallmark and requirement at Jason Johnson Racing set forth by the late Jason Johnson and will continue into the future. 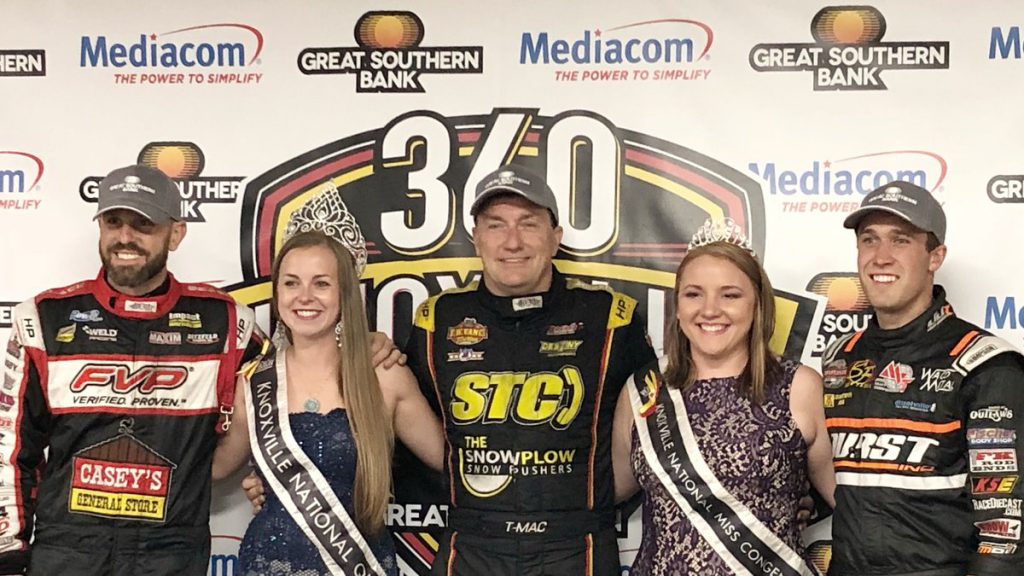