CARSON MACEDO SHINES BRIGHTLY IN KNOXVILLE: LEMOORE, CALIFORNIA NATIVE DRIVES THE JJR #41 TO A SIXTH PLACE FINISH IN THE BIGGEST SPRINT CAR RACE IN THE WORLD AGAINST THE BEST DRIVERS ON THE PLANET

KNOXVILLE, IOWA (August 11, 2018) – There is certainly nothing easy about racing at the Knoxville Nationals. Moreover, and quite frankly, it should not be easy as that is what makes the event so special even though it can be heartbreaking for some teams. Each year, almost 100 cars and teams congregate in Knoxville, Iowa to race in sprint cars version of the Indianapolis 500. The qualifying format forces your team and driver to perform at the top of their game from preparation to on track performance. When you do, you earn points in everything you do during each of the preliminary nights starting with time trials and concluding with your final event.

Carson Macedo and the JJR #41 team performed throughout their Thursday qualifying efforts and earned the right to start from the outside of row four in the 58 Annual Knoxville Nationals aboard the Mesilla Valley Transportation (MVT)/Tarlton and Son/Durst/Meyers Constructors #41 Maxim. Team owner, Bobbi Johnson, and crew chief, Philip Dietz, along with Tyler Elliott and Patrick Dudzinski worked extremely hard prepare the “Dream Team” and JJR equipment prior to arrival with one goal I mind – to provide Macedo with the best equipment to maximize the opportunity to perform each night. Mission accomplished.

With the 25-car field set on Saturday night, with the final four qualifiers coming out of the B-Main, it was time to go racing in front of a sold-out house at Knoxville Raceway. With pyrotechnics exploding and filling the air with smoke, Macedo pulled the JJR #41 to the head of the field, aligned in the missing man formation, to honor the late Jason Johnson, as the fans cheered to honor their fallen hero. When the smoke cleared, the field was set in their two-by-two starting order and polesitter, Brad Sweet, leaped into the lead. Macedo quickly used his Kistler Engines/Engler Machine & Tool power to lock into a spirited duel with Tim Shaffer and Jacob Allen for position. The tussle continued lap after lap until Macedo dropped in line between Shaffer and Allen. With 17 laps in the books, Macedo encountered his first narrow escape of the night when Kerry fifth running Kerry Madsen hooked the cushion in turn two and darted to the bottom almost taking the forty-one out. Macedo narrowly avoided contact and the Lemoore, California native regained his focus and went back to work from the comfort of his Fibreworks Composites racing seat. On track action was halted on lap 19 when Rico Abreu flipped in turn four, just behind Macedo. Carson would restart from the eighth position in the Jonestown KOA/Waco Metal/Dissolvalloy #41. When the cars got back up to speed, Sweet was still leading as he was battling with Kyle Larson and Donny Schatz, while Macedo maneuvered around the bottom side of the track’s surface. He moved up to the cushion and hammered the loud pedal. He passed Kerry Madsen for the seventh spot before resetting his sights on Tim Shaffer who was running sixth. He tracked the Aliquippa, Pennsylvania driver down and was right on his rear nerf bar, poised and ready to make the pass for position entering turn three, when the yellow lights came on for the planned race stoppage on lap 25.

The horn sounded when all the cars came to rest in the pit area, and the three-minute clock started. The JJR crew went to work bolting on new Hoosier Racing Tires that were mounted and balanced on their WELD Racing wheels. They refueled the car for the final half of the race and made some minor air pressure adjustments as the push truck moved up to the bumper to push Macedo back off. Refueled and ready, the field was set to get back at it in the biggest sprint car race in the world. Macedo restarted from the seventh position aboard the Valvoline/Pro Powder Coating (PPC)/Factory Kahne Shocks #41. The green flag was waving over the field as leader Brad Sweet was involved in a fierce battle for the lead again with Schatz and Larson as Aaron Reutzel and Chad Kemenah rounded out the top five. However, Carson Macedo was coming fast and catching up quickly. He made an aggressive and daring two car pass through turns three and four and eventually found himself running in the top five. He continued to drive the forty-one hard as he started to track down fourth running Aaron Reutzel. Unbeknownst to the fans, the California driver of the JJR #41 was doing all of this as he was losing, and eventually lost, his power steering. A red flag was displayed with two laps to go for Kerry Madsen who flipped his Muddy’s #2 in turn four. All that remained was a green-white-checkered dash to the finish for the best sprint car drivers in the world. Sweet was still leading over Schatz and Larson with Reutzel and Macedo rounding out the top five. When the accident scene was cleared, Sweet led the Schatz under the green flag in the lead as the two were racing side-by-side for the lead. Macedo muscled up and was doing everything he could do to drive the forty-one to the finish to maximize his performance. Tim Kaeding snuck by and stole the fifth position. Sweet held off Schatz to win the 58 Annual 410 Knoxville Nationals over Schatz, Larson and Reutzel with Kaeding finishing fifth. The talented Californian driver, Carson Macedo, crossed the finish line sixth aboard the Mesilla Valley Transportation (MVT)/Saich Family/LogoDaddy/Max Papis Innovations (MPI) #41. A great run for the forty-one in the biggest sprint car race of the year!

There were some other notable victories and events for the JJR #41 team and driver on this special night at Knoxville:

The first one was the Jason Johnson Racing (JJR) team was recognized, for the second consecutive year, as the 2018 Best Dressed Team. 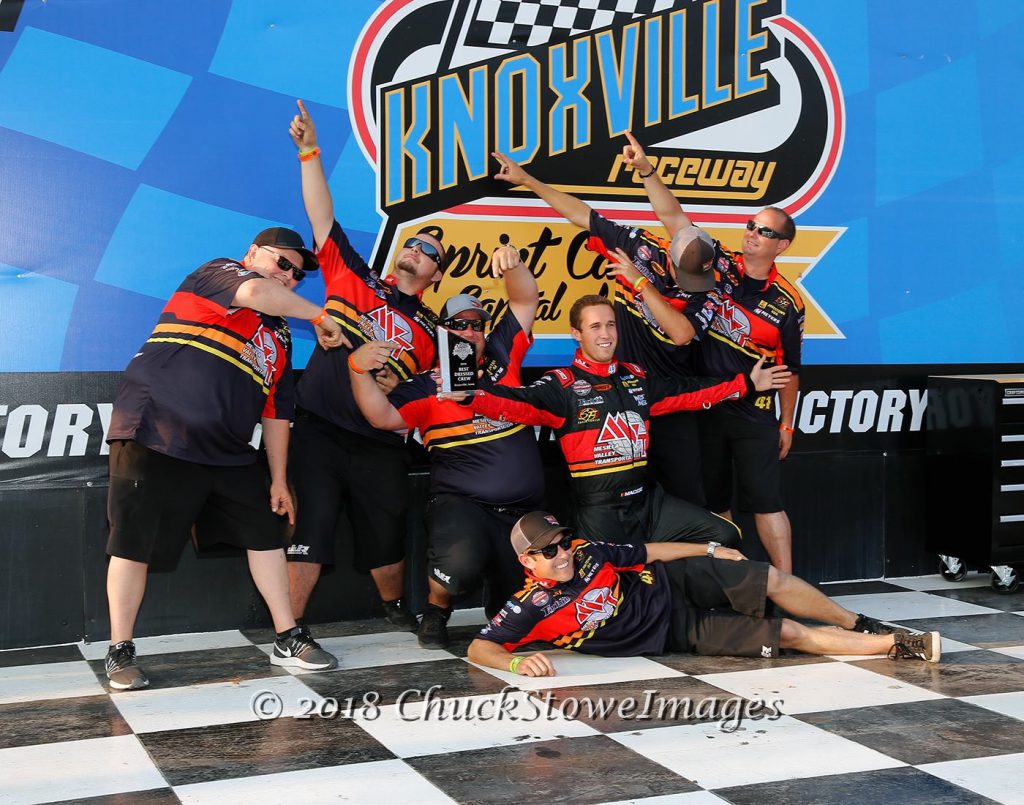 In addition, Carson Macedo earned the recognition as the 2018 Beaver Drill & Tool Company Jesse Hockett Mr. Sprint Car Award for his performance over the entire 10-day stretch in both 360 and 410 action at Knoxville. A well-deserved award and recognition for the talented driver out of Lemoore, California. A special thank you to Tony Stewart and Tony Stewart Racing (TSR) for asking Carson to drive their #14 in the 360 Ultimate Challenge race at Oskaloosa on Tuesday evening, with the opportunity and win certainly contributing to this award and recognition.

Jaxx Johnson was also invited to the flagstand to wave the flags over the A-Main starters during their warm up session. A sincere thank you to the Clarks and Knoxville Raceway for offering this very special opportunity to Jaxx as he had an absolute blast. He will cherish the checkered flags for a lifetime.

A sincere and heartfelt thank you to all of our team’s loyal and unwavering supporters, fans as well as Carson Macedo and Natalie Sather for making this dream come alive for the JJR #41 team in Knoxville, Iowa. We are so grateful for the good people involved in our sport and we wish Carson Macedo and the entire #3G team continued success, safety and speed this season as they pursue the Arctic Cat All Star Circuit of Champions championship title. Thank you #3G team for sharing your driver with our team at Knoxville. We are forever grateful. #FOREVER41 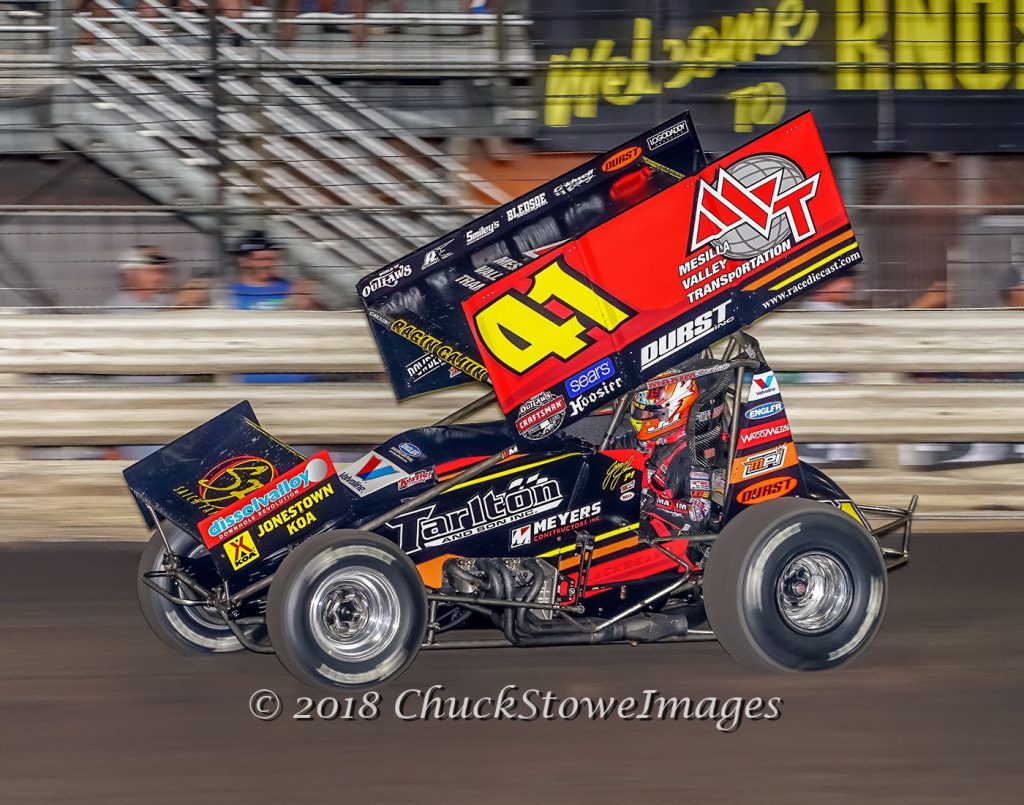