ANOTHER WIN DURING THE AFTERNOON AT JACKSON: JOHNSON BATTLES TO WIN BACK-TO-BACK PRELIMINARY FEATURES AT THE JACKSON NATIONALS TAKING THE TOP SPOT AND THE WIN IN THE MAKE-UP RACE

JACKSON, MINNESOTA (June 9, 2018 – Afternoon Make-Up Race) – After the confetti was cleared in victory lane, Jason and the JJR #41 team were back in the pit area at Jackson Motorplex with their Mesilla Valley Transportation (MVT)/MSD Performance #41 Maxim looking to continue their winning ways on Saturday afternoon in the make-up race for Thursday night’s rainout. There were 39 cars readying their equipment for the first of two races in Saturday’s doubleheader.

There were enough cars to split them into two separate qualifying groups for time trials. The Ragin’ Cajun’s Waco Metal/Fischer Body Shop #41 Maxim would sit in the staging lane as he waited for his opportunity to show off his Engler Machine & Tool power! When Clyde Knipp completed his two laps it was the Eunice, Louisiana natives turn to attack the track. He would do just that as he pedaled down and got his Kistler Engines powerplant rolling to take the green flag. He ran a smooth first lap to stop the clock at 13.120 seconds, but stayed on the loud pedal and improve his time the second time around with a lap of 13.065 seconds. The quicker of his two laps was fourth quick in the second group behind Tim Kaeding (13.009 seconds), Kerry Madsen (13.029 seconds) and Terry McCarl (13.060 seconds) laps.

The Louisianan would start second in the final heat race of the day as he lined up beside fellow P1 Performance Racewear posse member Kerry Madsen on the front row behind the blue pace truck. Brooke Tatnell and Logan Schuchart would follow close behind in row two, with Sheldon Haudenschild, Dominic Scelzi, Brent Marks, Scotty Thiel, and Colin Smith rounding out the starting grid. When the green lights illuminated around the racetrack, Jason accelerated from his outside starting position and used his KSE Racing Products as he dove low into turn one as Madsen held onto the lead position. With two laps completed, Dominic Scelzi spun in turn four to bring out the caution. Starting side-by-side restart order, Jason would have another opportunity to battle for the lead but it was Madsen again to the front with the Ragin’ Cajun close behind in the runner-up position. There was a battle for the transfer spot behind the top three drivers for the remainder of the laps with Madsen taking the win over Johnson, Schuchart, and Haudenschild with Brooke Tatnell locking down the fifth and final transfer spot.

For the second consecutive race, the JJR #41 team and driver earned a spot in the Sears Craftsman Dash, which is a six lap race with the finishing order setting the starting positions for the first four rows of the feature. For the draw, Jason the last driver to draw in his MVT branded P1 Performance Racewear driver’s suit as he reached into the Craftsman toolbox for a numbered wrench. The last one was the wrench with the #1 on it, which put him on the pole for the Dash. He would share the front row with Jacob Allen as Lynton Jeffrey and Terry McCarl settled into row two. Daryn Pittman and Cory Eliason made up row three with Tim Kaeding and Kerry Madsen in row four. It was Jacob Allen jumping into the top spot when the green flag waved with Jason falling into the runner-up position. Allen would lead all six laps taking the win as Jason brought the MVT/Greber Racing Products #41 Maxim home second followed across the finish line by McCarl, Jeffrey, Eliason, Pittman and Madsen with Kaeding rounding out the finishing order.

The Ragin’ Cajun was perched on the front row with Jacob Allen for the 30-lap feature under the overcast skies hovering over the Jackson Motorplex. The track officials took some extra time to prep the daytime track for the 24-car field so these talented sprint car drivers could put on a great show for the fans . . . World of Outlaws Craftsman Sprint Car Series style.  As the caution lights went out, the green flag flew from the flagstand. Jason drove hard down the frontstretch and into turn one, with Allen in the lead and third running McCarl trying a slide job for the second spot. Allen led the race with Johnson chasing him, as Pittman passed McCarl and was now running third. Pittman was reeling in Johnson with five lap down, but the Ragin Cajun still owned the position as he started to close in on the race leader. Johnson jumped the cushion coming out of turn two allowing Pittman to get by him. He was relentless though and stole the runner-up position back entering turn one. He then went back to work tracking down Allen as the leader approached some slower traffic. Jason drove through the middle but could not make the pass for the lead. At the halfway point of the race, the Ragin’ Cajun roared by Allen using the low side entering turn three to seize the lead as Tim Kaeding and Allen were now battling for the runner-up position. Johnson was mired in slower traffic now too, but he extended his lead to 1.5 seconds over Kaeding. Allen then passed Kaeding back and was fast on the bottom. He was tracking down the forty-one who was at the front of the field. Jason moved to the bottom and was really good himself as he took command and led the field across the finish line to make it back-to-back wins at the Jackson Nationals in the Mesilla Valley Transportation (MVT) #41 Maxim. Exiting the car with a few fist pumps, he was greeted by his smiling son Jaxx and his wife Bobbi to celebrate his second consecutive win atop his Vortex Racing Products wing.  In victory lane, he commented on Allen stating, “He’s tough. I was just taking my time and before I knew it Pittman was under me.” He continued, “So I got back up on the wheel and was able to track Jacob down and get the win.” He concluded by highlighting, “These MVT guys are doing a heck of a job on this forty-one.” Another great run for the forty-one! 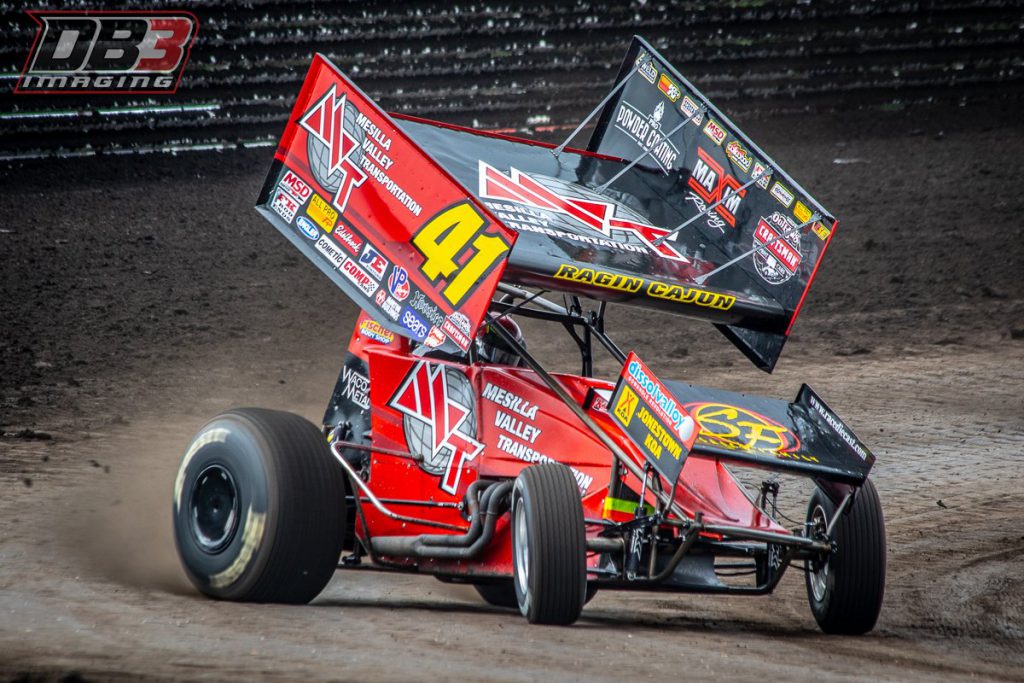 Jason and the JJR #41 MVT team sit atop the Jackson Nationals point standings with 697 points after both of the preliminary feature events were completed. The remainder of the top five breaking down like this: 2nd – Brad Sweet (678 Points); 3rd – Daryn Pittman (677 points); 4th – Brian Brown (633 points); and, 5th – Tim Kaeding (624 points). 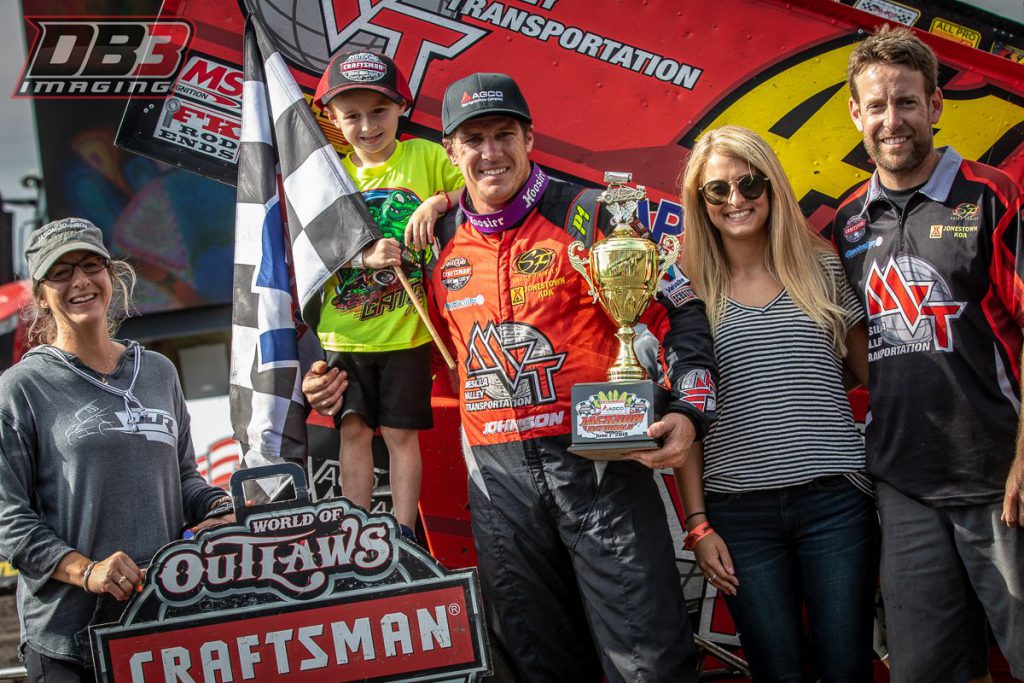 A Little Day Dreaming at Jackson Nationals Pays Off and Results in Another Win for the Ragin’ Cajun and the Impressive JJR #41 Team!