A SECOND PLACE RUN IN THE CAPITANI CLASSIC: ANOTHER SOLID PERFORMANCE BY CARSON MACEDO AND THE JJR #41 TEAM IN THE 7TH ANNUAL WELD RACING CAPITANI CLASSIC EARN THEM A SPOT ON THE PODIUM

KNOXVILLE, IOWA (August 5, 2018) – When it is early August and the thermometer read close to 100 degrees, you know it is a busy time at the Sprint Car Capital of the World – Knoxville Raceway. With the 360 Knoxville Nationals in the rear view mirror, Carson Macedo and the JJR #41 team turned their focus to the 410 races in the upcoming days. With their Kistler Engines/Engler Machine & Tool powerplant lowered into their Dissolvalloy Downhole Revolution/Meyers Constructors Inc. Maxim, the team was ready for another night of action at the famous half-mile oval. There were 67 teams stacked into the infield as fans streamed into the grandstands to watch the high speed stars put on a show in the 7th Annual WELD Racing Capitani Classic, simply known as the Cappy Classic.

The field was divided into two groups for time trials, with the Mesilla Valley Transportation (MVT)/Durst #41 Maxim scheduled to go out eighth. After watching the first 34 drivers set their times, it was time to climb into the Fibreworks Composites seat and pull on his Bell Racing helmet. He rolled into line and when he rolled out onto the track, he called for all the ponies under his hood to come to life in his Kistler Engines power plant and he took the green. He ran smooth and clean lines around the black clay and stopped the clock in 15.680 seconds. The determined driver from Lemoore, California stayed on the power pedal and cruised down the backstretch, this time shooting low through turns three and four, to improve his time to 15.599 seconds. The quicker of his two laps vaulted him into the top spot on the speed charts as he waited it out as the remaining 25 drivers took their laps. The last set of cars rolled out and Aaron Reutzel laid down a terrific lap in 15.587 seconds to set quick time as Mecedo’s quickest laps held up for second quick overall in the second group.

Using the times to set the heat race starting orders, where the fastest four in each heat were inverted, Carson would find himself in the fifth heat race where he would start on the outside of row two beside Shane Stewart. Willie Croft and Davey Heskin rolled from the front row, as Thomas Kennedy, Clint Garner, Joey Saldana, Shane Golobic, Mark Dobmeier, Harli White and Kevin Ingle filled out the remainder of the grid. Heskin wheeled into the lead when the green flag waved with Croft, Stewart and Macedo giving chase. With only the top three finishers transferring to the feature Carson need to wheel his way into a transfer position. Heskin put some distance between himself and the three chasers as Stewart passed Croft for the runner-up position. Macedo drove his Dissolvalloy Downhole Revolution hotrod hard to close the gap and eventually made the pass for the third position with two laps remaining. Heskin would take the win followed by Stewart and Macedo.

The Pole Shootout was the next racing opportunity on the schedule for the top eight drivers who earned their way into the event. Macedo earned his way into the vent, but had to wait to see whom he would complete against in the two car, two-lap shootout. Brad Sweet screamed his way through each round to make it an all-California shootout – Lemoore vs. Grass Valley. Sweet got the advantage at the start and took the win defining Carson’s starting position for the feature – he would start third. Sweet went on to win over Josh Baughman to earn the pole for the 25-lap Cappy Classic finale.

Brad Sweet earned the pole for the event as Carson Macedo paced from his third starting position aboard the Philip Dietz prepared JJR #41. The fans were standing on their feet and the drivers prepared to drop their right foot. It was go time at Knoxville Raceway! On the initial start, Sweet soared into the lead with second starting Josh Baughman close behind. Paul McMahan held down the third position with Macedo settling into the fourth position in the Dissolvalloy Downhole Revolution/Million Heir Cosmetics #41. Macedo was on the gas and made the pass on McMahan to secure the show position. Before working his way by Baughman for the runner-up position. With 14 laps to go, the red flag was displayed as Matt Juhl flipped in turn two to pause the action on the track where Sweet was comfortably in command. Under the red flag, Macedo collected his thoughts and would restart from the second position with Paul McMahan right behind on his rear nerf bar. Sweet again led the field to the green as McMahan made the pass for the second spot on Macedo. The poised California driver, who has been strong all week, stayed on the loud pedal and with 10 laps to go he reclaimed the runner-up position. Sweet went on to win the Cappy Classic over Macedo and Brian Brown. After the checkered flag flew, the humble Macedo explained, “I can’t say enough about the #41 team.” He continued, “They’re giving me an awesome racecar, night in and night out. This whole family has been great to be around. I am so thankful for the opportunity to drive this racecar. Brad was exceptionally good tonight. I really wanted to get a good restart there, but we stumbled a bit and Paul got around me. We had to work hard to get back by him.” A great run by Carson and the forty-one team! 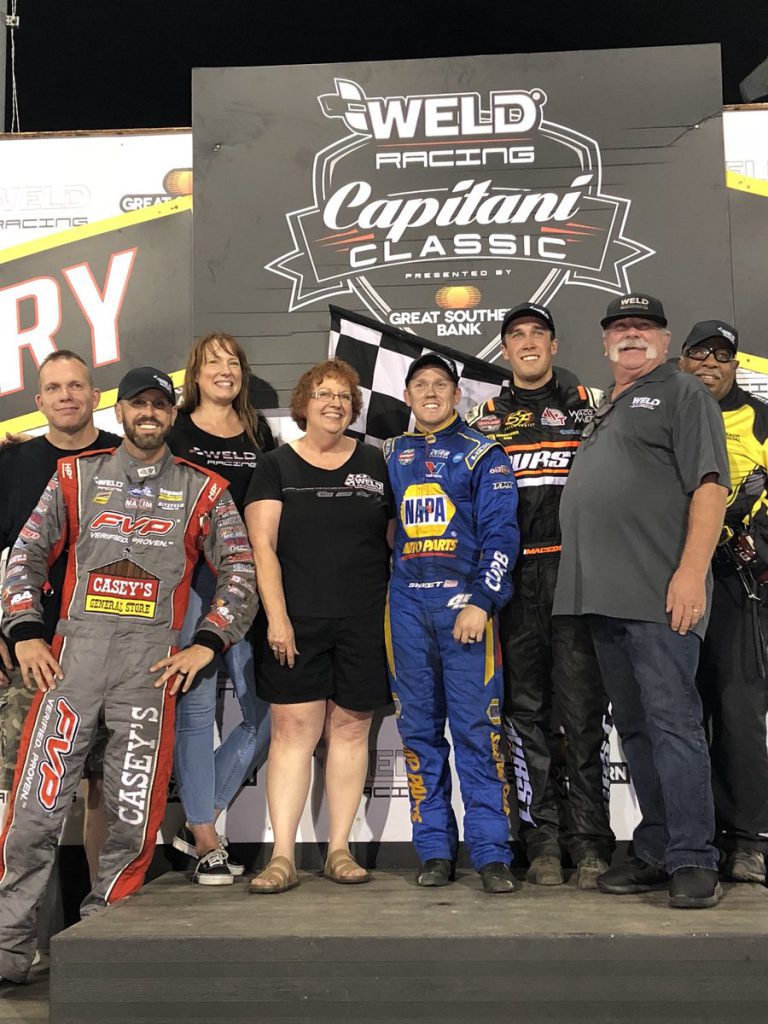 Another Podium Run at the Cappy Classic for Carson Macedo and the Jason Johnson Racing (JJR) #41 Team!