A BLUE DISSOLVALLOY STREAK AT ELDORA: MACEDO WHEELS THE DISSOLVALLOY DOWNHOLE REVOLUTION #41 MAXIM AROUND ELDORA SPEEDWAY TO A 4TH PLACE FINISH IN THE #LASTCALLFORTHEMALL EVENT

ROSSBURG, OHIO (October 14, 2018) – Carson Macedo and the Jason Johnson Racing (JJR) #41 team headed across Interstate 70 after the checkered flag dropped at the Terre Haute Action Track for a rare late afternoon race at Tony Stewart’s famous Eldora Raceway. In an event billed as the #LastCallForThemAll, 40 competitive 410 cubic inch sprint cars lined up in the infield for the chance to win the final race at Eldora for the 2018 racing season. The JJR team was excited to get back on the track with Macedo behind the wheel. 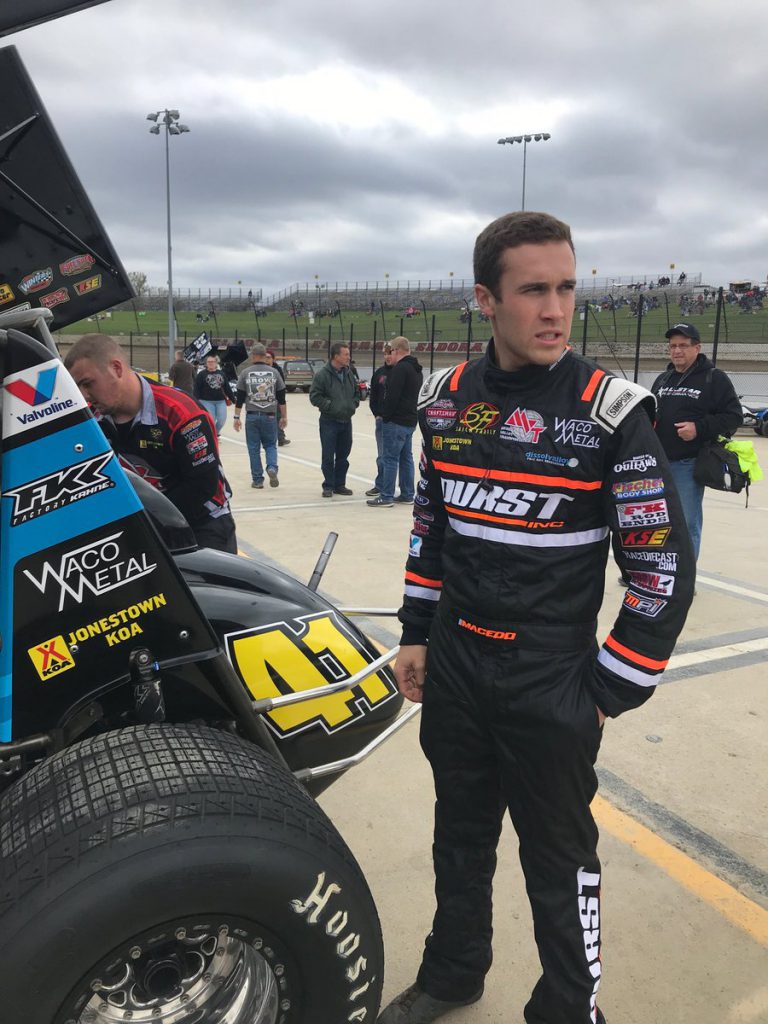 The JJR team was once again proudly representing Dissolvalloy Downhole Revolution/Durst Inc. on their forty-one entry with the popular blue paint scheme. For time trials, the field split into two equal groups with 20 cars in each qualifying group. The likeable driver from Lemoore, California would be the 16th car out in the second group of cars for qualifying. He climbed into his Fibreworks Composites carbon fiber fitted seat and buckled into his Crow Enterprizes safety belts. He waited patiently in the staging area, but with a bump of the push truck his Kistler Engines power came to life as he rolled up the banking in turn one and pounded the gas. He took the green flag and was trucking, Mesilla Valley Transportation (MVT) style, as he was building speed and hitting his marks. He turned his first lap in 12.903 seconds. The determined speed chauffeur stayed on the loud pedal and masterfully turned his second lap at 12.899 seconds to vault to the top of the speed board in the second time trial session where he would stay when the last qualifier, Daryn Pittman, completed his two laps.

Earning the pole start position in the third heat race aboard the Dissolvalloy/Durst #41 Maxim with Joey Saldana’s #71x to his outside, Macedo was ready to get his elbows up for 8-lap race with the top two transferring to the Craftsman Dash and the top five locking into the 30-lap A-Main. The two-by-two starting lineup made their way down the back straightaway and Macedo dropped his right foot and led the field under the green flag. Saldana dove low as Macedo whipped around the cushion through turns one and two. He led lap one and was showing the way in the Jonestown KOA/FK Shocks #41. With each completed lap, the California kid extended his lead over Saldana. When the checkers waved, Macedo was the first to see them as he collected the heat race victory over Saldana, Brock Zearfoss, Brian Brown and Sheldon Haudenschild.

Locked into the Craftsman Dash, the JJR #41 driver would head to the stage to draw his starting spot out of the Craftsman toolbox. He pulled Jaxx Johnson’s favorite number “5”, which positioned the Waco Metal/Pro Powder Coating #41 on the inside of row three with Joey Saldana again to his outside. The two talented racers would fall in behind Tim Shaffer and Parker Price-Miller who filled row one, and Ian Madsen and Greg Wilson in row two. Nine-time WoO champion Donny Schatz and NASCAR star Christopher Bell would round out the starting lineup. It was Shaffer to the lead when the green flag waved as Price-Miller, Madsen and Wilson followed. Macedo was perched in the fifth position, but was picking up speed and closing in on Wilson. He was hauling and closed in going down the back straightaway and dove under Wilson and slid up across the track. Continuing to slide, Macedo just about backed it into the wall, but with poise and composure drove out of it and shot down the frontstretch ahead of Wilson.

For the 30-lap A-Main, Macedo would start on the outside of row two in the Dissolvalloy Downhole Revolution/Auto Meter #41 Maxim Racing entry. He shared the second row with Ian Madsen and Tim Shaffer and Parker Price-Miller paced the field at the front of the pack. With a $10,000 check awaiting the winner, it was time to focus, as the 24 drivers were ready to get their elbows up at Eldora Speedway. When the yellow lights were replaced with green ones, the sweet sound of sprint cars filled the air around Rossburg, Ohio. Shaffer controlled the top spot over Price-Miller as Macedo wheeled the forty-one carrying momentum down the backstretch. It was Price-Miller leading lap one over Shaffer and Macedo. Macedo continued to battle with Shaffer making a couple attempts to make the pass for the runner-up position to no avail. He was determined and rolled his Weld Racing wheels by Shaffer on lap nine to take over the runner-up spot. Macedo was chasing race leader Parker Price-Miller when Christopher Bell tracked him down. They both were catching the leader as Bell passed Macedo for second and then quickly seized the lead. Macedo stayed on the gas and at the halfway point of the race passed Price-Miller for the runner-up position. A caution flew with nine laps to go for Aaron Reutzel who slowed in three and four before heading to the work area. On the restart, Bell and Macedo would have an uninhibited view from the front as Bell accelerated first. It was Parker Price-Miller though who got a terrific restart as he dove low entering turn one in an attempt to take the lead back. Bell held on over Price-Miller as Macedo was shuffled back to third with Schatz focused on his rear nerf bar. Schatz would dive low to take over the show position as Bell streaked to the victory under the black and white waving cloth. Parker Price-Miller came home second as Schatz rounded out the podium. Macedo came home fourth with an impressive run aboard the Dissolvalloy Downhole Revolution/Million Heir Cosmetics #41 Maxim as he crossed the finish line ahead of Ian Madsen. A great run for the forty-one! 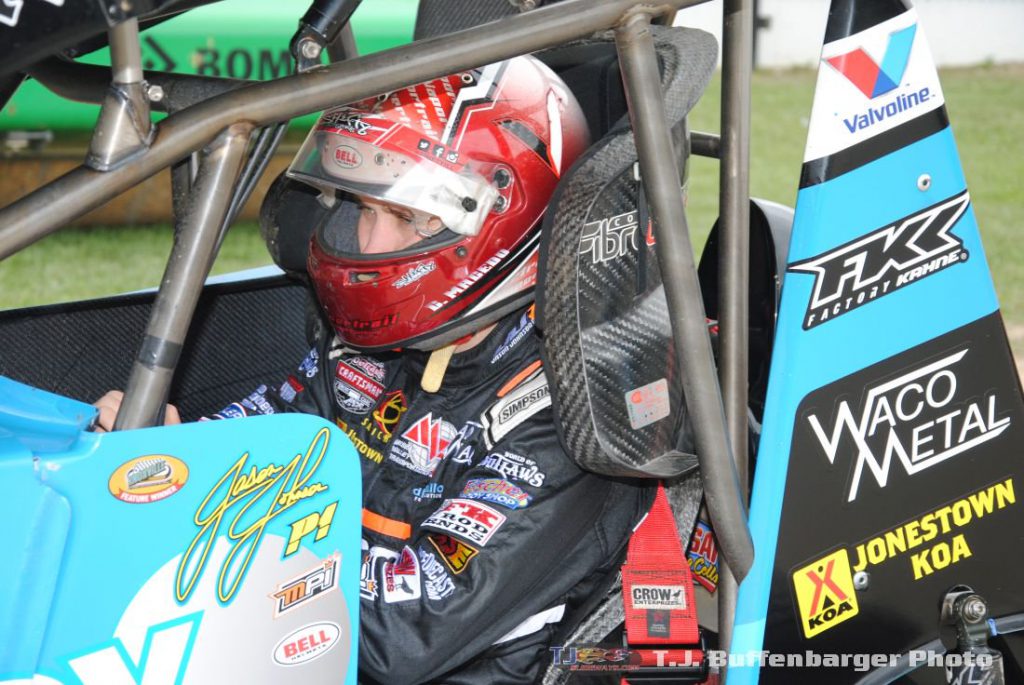 Carson Macedo Drives the Dissolvalloy Downhole Revolution #41 to a 4th Place Finish at Eldora Speedway in the #LastCallForThemAll Event!